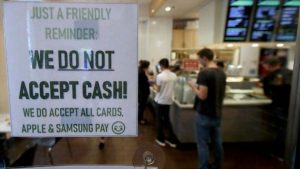 We’ve written frequently on the advent of a cashless society. Our articles and links include references to central banks and academics calling for an end to cash. We’ve also highlighted retail stores with “No Cash” signs on the door.

Cashless payment channels including direct deposit to credit cards, debit cards, PayPal, Apple Pay and chip payments are ubiquitous. In an extreme example, citizens in Sweden are now getting “chipped” (a small radio frequency transmitter is implanted into their hands) so they can make payments with the wave of a hand. (This also subjects you to 24/7 police surveillance, but that’s another story.)

Yet a funny thing is happening in the world of cash as reported in this article. Cash is making a comeback!

This article states that in the United States, cash in circulation has increased to nearly the highest level in 36 years and is up 5.6% since before the 2008 financial crisis. There are more $100 bills in circulation today than $1 bills.

The share of the $100 bill as a percentage of all currency in circulation has increased from 73% in 2008 to 80% as of last year. The reasons for this have to do with a loss of trust in the banking system after 2008 and preparation for an even worse crisis to come. Of course, gold is another way to hold assets in nondigital form and without reliance on banks or banking.

Still, a healthy dose of cash will serve you well in a natural disaster such as the wildfires raging in California today. The power is out in much of California, so credit cards, ATMs and gas pumps don’t work. But a Benjamin Franklin $100 bill will still get you food or water when the opportunity presents.

The elites will still push for a cashless society, but everyday Americans seem prepared to push back.