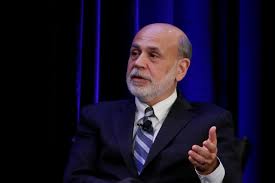 We’ve all seen zombie movies where the good guys shoot the zombies but the zombies just keep coming because… they’re zombies!

Market observers can’t be blamed for feeling the same way about former Fed Chair Ben Bernanke. Bernanke was Fed chair from 2006–2014 before handing over the gavel to Janet Yellen. After his term, Bernanke did not return to academia (he had been a professor at Princeton) but became affiliated with the Brookings Institution on Massachusetts Avenue in Washington, D.C. (Washington has a strange pull on people. They come from all over, but most of them never leave. It gets more like Imperial Rome every day.)

Just when we thought that Bernanke might be buried in the D.C. swamp, never to be heard from again… he’s baaack!

As described in this article, Bernanke gave a high-profile address to the American Economics Association at a meeting in San Diego on Jan. 4, 2020. In his address, Bernanke said the Fed has plenty of tools to fight a new recession. He included quantitative easing (QE), negative interest rates and forward guidance among the tools in the toolkit.

Bernanke failed to mention that QE2 and QE3 did not stimulate the economy; this has been the weakest economic expansion in U.S. history. All that QE did was create asset bubbles in stocks, bonds and real estate that have yet to deflate (if we’re lucky) or crash (if we’re not).

Negative interest rates do not encourage people to spend as Bernanke expects. Instead, people save more to make up for what the bank is confiscating as “negative” interest. That hurts growth and pushes the Fed even further away from its inflation target.

Forward guidance lacks credibility because the Fed’s forecast record is abysmal. I’ve counted at least 13 times the Fed flip-flopped on policy because they couldn’t get the forecast right.

At least new Fed Chair Jay Powell is a pragmatist, not an ideologue like Bernanke. Ben should go back to Brookings and stay there. He had his turn on the stage and we’re all still counting the cost.