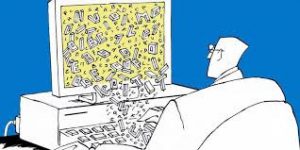 This article is titled “How Trolls Overran the Public Square.” But a better title might be, “How Globalists Lost Control of the Media.”

The article is written by J. Bradford DeLong. Brad is one of the most prominent mainstream economists, a conventional neo-Keynesian who bows down to icons such as Paul Krugman and Larry Summers. He’s a professor at Berkeley and a former Treasury Department official in the Clinton administration.

DeLong has not won the Nobel prize in economics (like Krugman), but he’s probably on the short list to win it one of these days. That’s not exactly an endorsement of his views considering that over one-third of the Nobel prizes in economics have been awarded for false science such as the “efficient-market hypothesis” and a capital markets allocation model based on a “risk-free rate” (there isn’t one, because no assets are risk-free).

DeLong pretends to complain about “trolls” on Twitter and other social media channels who challenge his mainstream thinking. As he puts it, “The current public sphere does not serve us well.” That’s what DeLong says, but that’s not what he really means.

DeLong wants a return to the media landscape of the 1960s, 1970s and 1980s. That’s when everyday citizens had no voice and communication was controlled by three TV networks (CBS, ABC and NBC) and a handful of newspapers and magazines (Time, The New York Times, The Washington Post and the Los Angeles Times).

Those channels only allowed approved individuals to express their views. Approval was based on correct thinking (Keynes is good, Hayek is bad) and correct policies (higher taxes are good, tax cuts are bad).

In a world like that, DeLong would have a big megaphone and no criticism. Instead, his false theories and out-of-date models are criticized all day long by creative analysts on the internet. Too bad for DeLong, but great news for the rest of us.