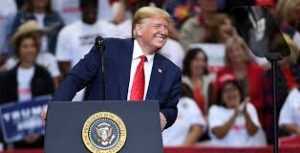 This may sound funny, but there are no “national elections” in the United States. We elect officials to national office including president and vice president, but these elections are conducted state by state (and in the District of Columbia) and are not truly national.

In fact, when you vote for “president,” you don’t actually vote for president — you vote for a group of “electors” chosen by the political parties and they will vote in the Electoral College for him or her about a month after Election Day.

The point is not to nitpick the process or dredge up a long-forgotten civics lesson from the sixth grade. The point is to help investors understand how to read polls and other preelection data.

Between now and Election Day 2020, you will be bombarded by “national polls” that predict one outcome or another (mostly negative to Trump). You can safely ignore these because a national poll will typically overweight the number of respondents from New York, California and a small number of other high-population states.

Yes, the Democratic candidate will win in New York, California, Illinois and a few other big states. But they can only win them once, not twice or three times. The “extra” votes (above what’s needed to win once) go to waste.

Meanwhile, Trump can win Electoral College votes in groups of two, three or four from states with small populations that don’t impact the polls much. Trump can also win big states (Michigan, Florida and Texas) by small margins that look close in the polls but are actually huge in the Electoral College because electoral votes are allocated on an all-or-none basis.

To do election forecasting accurately, you need to focus on state polls. This article is a good example. It shows that only 43% of the voters in six key swing states favor impeachment, compared with slight majorities that favor impeachment in “national” polls.

That’s good news for Trump because it opens a path to reelection even if he is impeached. There’s more to the science of interpreting polls, but keeping the distinction between national and state polls in mind is a good place to start.