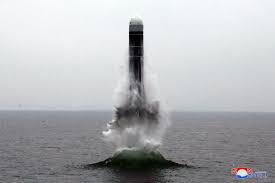 While all eyes have been focused on the Persian Gulf and Iranian confrontations with the U.S. and Saudi Arabia, a new round of nuclear weapons testing has been kicked off in North Korea.

This article reports on a test-firing of a submarine-launched ballistic missile (SLBM) by North Korea. As you’ll see in the photograph that is included in the article, the rounded warhead is consistent with the type used for nuclear weapons.

This test was even more provocative because the missile landed in a part of the Sea of Japan claimed by Japan as part of its exclusive economic zone under international law and therefore constitutes a breach of Japanese sovereignty. Analysts interpret the launch as a provocation designed to get Trump back to the bargaining table with Kim Jong Un with a view to possible relief from U.S. economic sanctions on North Korea.

That’s plausible, but an even simpler explanation is at hand. Even without detonating a nuclear device (the last test was in September 2017), this launch is another step in the development of a full-scale nuclear arsenal including short-range, intermediate-range, intercontinental ballistic missiles and SLBMs. The submarine platform is especially dangerous because the submarines can be navigated close to the U.S., putting many major cities at risk even if the range of the missile itself is limited.

Trump refuses to reduce sanctions on North Korea unless they begin to dismantle their nuclear weapons. North Korea has shown no inclination to do so and is merely playing for time. This is just one more geopolitical flashpoint that is possibly heading toward war. Investors have been warned.