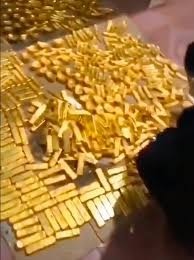 I have long recommended a modest allocation to physical gold bullion for investor portfolios, both as a hedge to inflation and for wealth preservation in a financial panic. My suggested allocation is 10% of investable assets, but investors can have more or less depending on their risk appetites.

Of course, some investors take things too far and the situation described in this article is a good example! A Chinese citizen and Communist Party official named Zhang Qi was discovered to have 13 tons of gold (worth over $600 million) and cash equal to over $35 billion stashed away in his house. There was so much gold that it filled purpose-built racks and spilled over onto the floor.

This hoard would have made Zhang Qi one of the world’s richest people. Of course, all of that wealth has now been confiscated by the Communist Party and Zhang Qi is in prison. He is likely to receive the death penalty. And he’s not alone.

It’s estimated that more than 120 other senior officials and politicians have been implicated in similar crimes. Apart from just an example of blind greed, there are a number of lessons that can be learned from this.

The first is that gold is money. The corrupt official was not hoarding stocks, bonds or money market funds; he wanted gold. The second lesson is you need to store gold in a safe location (not a bank) with a good rule of law. If you have your gold in a lawless jurisdiction like China, it’s subject to confiscation at a moment’s notice. Zhang Qi is alleged to be entirely corrupt, but legitimate gold owners are no safer in a jurisdiction like China because “economic crimes” can be invented from thin air.

Finally, it’s important to keep your gold close to where you’ll want it in times of acute economic distress. Gold is extremely dense and hard to move. I’ve handled standard 400-ounce bars (equal to a 25-pound free weight); you need to be fit to do that. Don’t try moving a ton (let alone 13 tons) without armored cars or other easily interdicted vehicles.

Gold is the best form of money, but it’s not easy to take on the run. Keep it where you’ll want it when the chips are down.