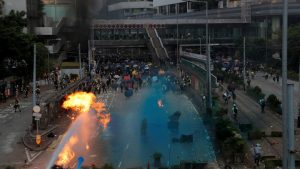 Hong Kong has been making headlines the past four months due to street demonstrations against both the local administration of Carrie Lam and her bosses in Beijing. These demonstrations have escalated from entirely peaceful protests to more violent actions including Molotov cocktails, overturning cars and smashing store windows.

The escalation has been matched and prompted by escalating police tactics including thinly disguised thugs, rubber bullets, water cannons, armored vehicles, digital surveillance, arrests and the substitution of paramilitary forces for regular police. Violence came to a head last week when an 18-year-old protestor was shot with a live round at point-blank range (the protestor survived).

The protests began with opposition to a Hong Kong bill that would have allowed extradition to Beijing of those arrested for certain offenses, mainly political, committed in Hong Kong. Once in Beijing, any pretense of the rule of law would be gone and summary proceedings, including sentencing to concentration camps for thought control, could be expected. Later, other demands were added, including an investigation into police tactics, amnesty for protestors and the removal of Carrie Lam from office.

None of these demands are likely to be granted by Beijing. But the protestors show no signs of backing off their protests or demands. As described in this article, continued escalation and more violence can be expected.

Western markets have been remarkably complacent about these events. It’s almost as if the physical distance to Hong Kong insulates the West from the disruption. That view is a mistake.

Physical distance is irrelevant in a densely connected digital world. Hong Kong is one of the largest financial centers in the world alongside New York, London and Tokyo. Already capital flight is emerging, GDP is dropping, property values are declining and talented professionals are moving out. Regional financial businesses are shifting rapidly to Singapore.

At a minimum, this represents sheer economic waste. At worst, an unexpected entity failure or market crash could spark global contagion and a liquidity crisis. An increased allocation to cash and a modest allocation to gold or U.S. Treasuries are the right hedge. Complacency is not an option.