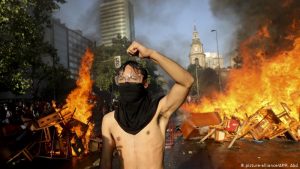 Those who follow foreign affairs are certainly well acquainted with recent demonstrations in Hong Kong against infringement of local citizens’ rights by the Communist Party of China based in Beijing. These demonstrations have persisted for months and have escalated both in violence and in the scope of the protesters’ demands.

The Communists are using water cannons, tear gas, rubber bullets (and some have been shot with real bullets), truncheons, arrests and even murder (dismembered bodies of protesters have turned up in the waters around Hong Kong). But how many have noticed this is not a local phenomenon? Protests bordering on riots with violence on both sides are occurring in Barcelona, Paris, Santiago, Baghdad and Caracas.

Meanwhile, Mexico’s army is losing pitched battles with cartel troops and South African farmers are being murdered by squatters even as the power goes out in the major cities there. Argentina is also suffering acute financial distress bordering on social unrest. The U.K., Israel, Italy and the U.S. all have governments that are divided to the point of paralysis.

This article offers a closer look at the situation in Santiago. The larger point is that we are witnessing a global surge in urban protests by students, homemakers and lower-paid workers against elites and governments that deny human rights or block paths to economic progress — or both.

Such scenes in a single city are not uncommon. But when 10 or so cities on five continents erupt in violence at the same time and major governments cannot achieve consensus on the legitimacy of government itself (think Brexit and impeachment), it is reasonable to ask if we are watching the beginning of the end of civilization, not unlike what happened at the end of the Bronze Age (1100 B.C.) and again with the fall of the Roman Empire (A.D. 476).

We can’t answer that question (yet) but we can be prepared in case the answer is the one many fear. Investors with gold, silver, land, hard assets, fine art and other tangibles are in the best position to survive the worst.