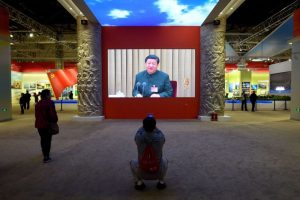 This may be the most important article you read this year. It’s written by Lee Miller, a good friend of mine, and his colleague Derek Scissors. Lee is the founder and proprietor of an economic research service called “China Beige Book.”

The name “beige book” was borrowed from the surveys conducted by regional Federal Reserve Banks of economic conditions in their regions. (In the days before internet, the Fed issued hard copy booklets with different colored covers based on subject matter. The economic conditions booklet has a beige-colored cover, hence the name). Lee does in China what the Fed does in its regions, except he covers the entire country.

He has a diverse network of over 3,000 companies and entrepreneurs in all business sectors. He gets his information straight from the source and bypasses government channels. It’s like a private intelligence service. In fact, Lee’s network is better than the CIA’s when it comes to economic data. The CIA actually turns to Lee for advice.

The detailed research service costs about $100,000 per year for one subscription. But, Lee publishes summaries on a quarterly basis, which are freely available. This article is his latest summary and it’s not a pretty picture.

China Beige Book, CBB, says that China has been covering up and smoothing over problems related to weak growth and excessive debt in order to provide a calm face to the world in advance of the National Congress of the Communist Party of China, which began last week. CBB also makes it clear that the much-touted “rebalancing” of the Chinese economy away from investment and manufacturing toward consumption and spending has not occurred. Instead China has doubled down on excess capacity in coal, steel, and manufacturing and has continued its policy of wasteful investment fueled with unpayable debt.

CBB forecasts that either China will experience a significant slowdown in 2018, which will have ripple effects on world growth, or else it will face an even bigger debacle down the road. Both outcomes are bad news for the global economy.