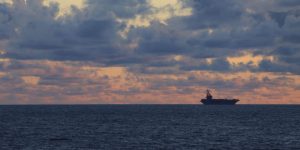 It’s not often we get to include an article from Popular Mechanics in our Five Links feature, since our editorial focus is financial. Yet in a world where the financial and geopolitical converge, an expert assessment of military forces of the kind provided in this article does have major implications for investors.

The U.S. has a total of 11 aircraft carrier strike groups. Each strike group is led by a nuclear-powered aircraft supercarrier. Ten of the supercarriers are of the Nimitz Class and one is of the new Ford Class, with improved technology and other operating efficiencies. At any one time, as many as eight of the carriers may be in home port undergoing repair and maintenance, for training or otherwise awaiting deployment. Only four or five are actually underway in one of the U.S. Navy’s major areas of operation (AO) at once.

This article describes that right now, three aircraft carrier strike groups are in the Seventh Fleet AO in the western Pacific, converging on the Korean Peninsula. Each strike group contains more firepower than the entire navy of any other country in the world. Now the U.S. has concentrated three strike groups on Korea. At a minimum, this is a show of force designed to convince North Korea’s leader, Kim Jong Un, to stand down from his efforts to build an arsenal of nuclear-capable ICBMs that can end civilization in the U.S.

Let’s hope that works. If not, these same vessels will be used to destroy the Kim regime and eliminate the threat once and for all. The latter outcome, highly likely in my view, is not priced into markets. When it is, probably early in 2018, look for rallies in Treasury bonds, the U.S. dollar and gold, with potential collapses in emerging markets as hot money floods back into the U.S. as a safe haven in a world on the brink of war.