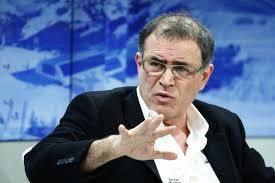 The entire world is guessing as to the final form of the Trump economic program. Right now there is something for everyone. The supply-side advisers are pushing for tax cuts. The Trump loyalists from the “Make America Great Again” camp are pushing for huge infrastructure spending. Some advisers, such as Steve Moore and Mike Pence, are in favor of free trade. Other advisers, such as David Malpass and Steve Bannon, favor a renegotiation of existing trade deals.

The Trump team seems to favor a strong dollar and higher interest rates. But the strong dollar is deflationary and pushes the Fed away from its inflation target. Fed rate hikes will do the same thing. On the other hand, if the Fed is slow to raise rates while spending takes off, inflation could surge out of control.

The truth is that Trump economic policy has not been set, and both inflationary and deflationary outcomes are in play.  This article  is a good summary of these contradictory forces. We’ll have to await further information, such as the names of Trump’s appointees to the Fed board of governors and the results of the Dec. 14 Fed meeting, before reaching more definitive conclusions about the shape of things to come.

Faced with this uncertainty, it’s a good time to increase your cash allocation until we can get better visibility on the Trump plan.