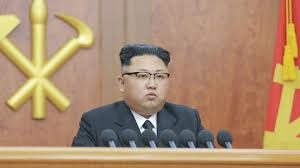 In the past six months, the U.S. stock market has learned how to normalize missile launches by North Korea. Last summer, a new rocket test might cause the stock market to drop about 1% on fears of a war between the U.S. and North Korea. But the market would quickly recover as diplomats hit the airways to reassure investors that everything was under control (it’s not).

Then another missile would fly, the market would go down, it would bounce back, and all was well. Eventually the stock market learned to normalize missile launches. It’s as if someone said, “Hey, if the markets are bouncing back every time, what’s the point of going down in the first place?”

No doubt the computer algorithms were adjusted accordingly. But, this is a little like a chain smoker rationalizing that somehow nicotine won’t kill him because he hasn’t died yet. That’s false, and the false belief will get you in the end.

Still, we may be reaching the point where the market starts to take this seriously. This article reports that North Korea is preparing to launch a new missile, possibly before you read this article. It’s likely to be an improved version of the Hwasong-14 (US code name “KN-20”). It’s an ICBM that can hit the continental U.S. from mobile launchers that are difficult to track and destroy.

This launch will either start the countdown to war as the U.S. prepares a preemptive strike. Or it will signal a capitulation by the U.S. if we decide that it’s too late and too dangerous to attack. In that case, we can start a countdown to another war — the invasion of South Korea by North Korea.

The market will wake up eventually and reprice for these risks. You don’t have to wait for the market’s wake-up call. This looks like a good opportunity to lighten up on listed equities and reallocate to cash, Treasury notes, gold, silver and other safe haven assets.